Sulli gets criticized for her lack of effort in performances

2. [+287, -27] Does Sulli know that she's able to achieve one of the hardest dreams because she was born with a pretty face... Is she even thankful... She should be thankful because she's a celebrity for her face despite her lack of talent. I'm not a Sulli fan but as someone who likes her, I want her to show more effort. I hope she realizes that the world doesn't revolve around her.

3. [+237, -50] What's funny with Sulli fans is that whenever Sulli gets criticized, they don't admit Sulli's mistakes and bash other innocent idols. She can't sing. Also, experts compared Jung Eunji and Sulli's acting skills and Jung Eunji totally won. I clearly read an interview where Sulli said something like she was more eager in acting ㅋㅋ She can't even sing her parts well and she's not even a good actress. Can't sing, can't dance, all she has is a visual and yet she doesn't even dance when other members are singing and dancing ㅋㅋ What is she good at except for her face? I think Sulli fans are proud of that, is it really something to be proud of? I saw a comment saying "Sulli became this popular for her face... don't compare her to anyone else" And Sulli fans still think Sulli's image is the same as before ㅠㅠ Just look on Facebook, you can see Sulli's image. Male fans don't talk about her and even f(x) fans know that their fandom is decreasing. Krystal and Victoria's fandoms are getting bigger but other members' fans are decreasing and their image is starting to hit the bottom. Still, the fans are saying "she's the visual top, she's better than IU, she's at the same level as Suzy", like stop. Know the reality...

4. [+87, -94] If Sulli improves her talents like how she got plastic surgery, she will hit daebak. She got prettier with her new eye work, the carboxy shots, and white tanning.

5. [+54, -4] I'm a Sulli fan and an f(x) fangirl. I felt that she was slacking off with her performances on music shows, but I thought she was only sick or something. But I remember watching this Chinese show, it was a really huge show. The stage setting was no joke and billions of people were watching it. Other members were smiling and were dancing hard, but Sulli didn't smile much and didn't put any effort to the point I got uncomfortable... I wasn't disappointed, I was more worried for her because she'll get a bad image from the public. Sulli-ya, let's work harder!!

7. [+51, -6] She's untalented and yet she's not even trying. She never even apologized for once. When Krystal got criticized for her attitude on Quiz To Change The World, she apologized herself and she's not being rude anymore.

9. [+36, -3] Sulli fans keep defending her that she's just a bad dancer, but how come she's always slacking off in the part where they have to lie on the floor? Is it also because she can't dance? And yet they're telling us not to bash her because she's pretty enough. There are people who don't find Sulli pretty and yet they're freaking forcing it ㅡㅡ 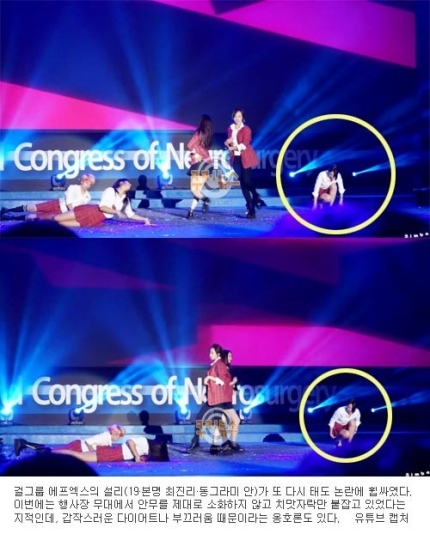 11. [+33, -3] Sulli fans are bringing up EXO Sehun and Jung Eunji to defend Sulli, saying these idols can't dance either, what a bull... The reason why Sulli is not reflecting is because her fans are stupid like this...