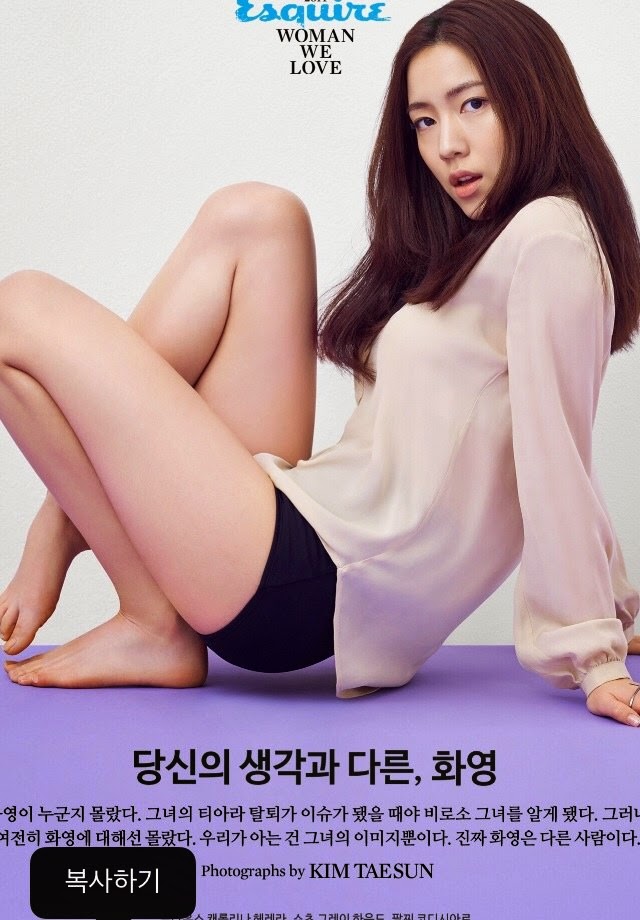 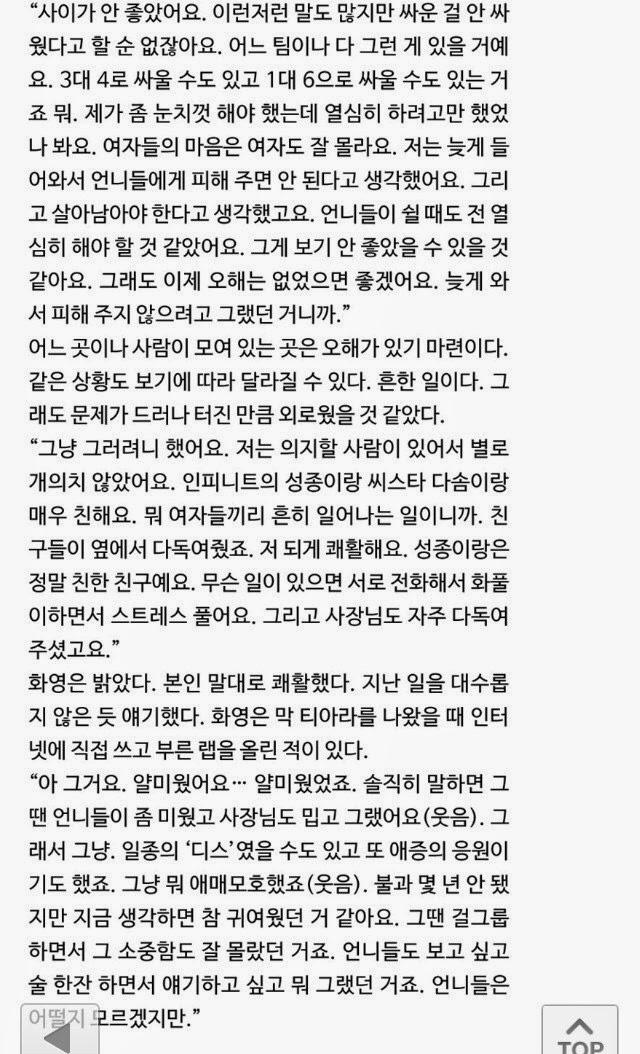 "We didn't have a good relationship. There are a lot of things but I can't say that there was no fight. I think every group is the same. It could be 3 vs 4 or 1 vs 6. I should've kept the line but I guess I tried too hard. Women don't know the mindset of women either. I joined the group late so I didn't think I should bother the unnies. And I also thought I should survive through. Maybe that didn't look good. I hope there's no more misunderstanding. I was only trying not to bother them."

"I had people to lean on so it didn't bother me as much. I'm very close with Infinite Sungjong and Sistar Dasom. It happens often with girls anyways. My friends supported me. I'm very outgoing. Sungjong is a really close friend of mine. When something happens, we call each other and relieve the stress. My boss also supported me."

(she's asked about her self-composed rap she posted when the scandal broke out)
"Ah yeah. They were annoying... To be honest, I disliked unnies and the boss at that time. So it was a "diss" and a cheer of "love and hate". It was mixed. It's not too long ago but looking back, I think it was so cute. I didn't know how precious it was to be in a girl group. I want to see unnies and have drinks with them. I'm not sure how unnies think, though."

4. [+97, -51] It's so pathetic ㅋㅋㅋ So it's true that they had trouble and that she didn't have a good relationship with the 6 members. Is "bullying" only about beating and swearing? Outcasting someone is also bullying. The best replies are nonsense. Fox? Real foxes don't act that way. Do you even know what "victim pretending" is? Hwayoung is a victim, why should she pretend to be one? If Hwayoung is indeed a fox, she'll say it was all her fault and embrace them. Her interview is clean, what's with all this bullshit? I feel so bad for her. When Hwayoung got kicked out, you guys said such things but now Hwayoung is the fox and the troublemaker ㅋㅋㅋㅋ

5. [+77, -34] Koreans and their hypocrisy. You guys bashed Hwayoung when she joined T-ara, shielded Hwayoung when the bullying scandal broke out, and now you guys are again bashing her ㅋㅋ

6. [+64, -12] Well girls know that T-ara incident always happens among girls. When T-ara debuted, I saw Boram and Soyeon being outcasted. Hwayoung's cast just got so much bigger because of T-ara members' bad past, the tweets, and the stupid company. But don't you think T-ara would hate this situation? They worked hard from their debut, Hwayoung then joined the group when she's untalented, the company media-played so much for her, and she was late to a concert because she was getting her nails done... I'm not saying that T-ara is innocent, though. T-ara is definitely at fault but I don't think Hwayoung is completely innocent from this... I said this to my friends and they looked at me weirdly. They're more weird because they talk behind people's backs but they shield Hwayoung... And this is not related but isn't there always someone who's outcasted from the whole class? Like someone whose mouth stinks or someone who tries too hard... People just have to avoid them unless they fix it.

9. [+52, -22] Watch Hello Baby, Hwayoung is the only one who changes the diapers. She was doing all of the hard tasks not to bother them and yet they bullied her. It was a good decision to leave the group. Stop getting associated with T-ara and go on your own path.